“There is a mouse by your shoulder!” said my bride, Akemi, in a not-at-all-calm voice.  I sat up quickly and looked back at where I had been laying, sure enough, a dead mouse had been tucked into the crook of my neck.

I have always told Akemi that our cat, Koji (runt in Japanese), is a cold blooded killer.  At home, in San Diego he hasn’t had much to kill except bugs and more bugs. 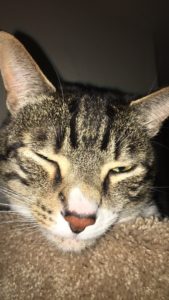 Koji is an indoor cat.  This is mostly because the first cat we got when moved to Scripps Ranch was taken by a coyote.  My bride refuses to let any other cat out of the house.  But also, Koji learned early that Raven, the dog, was only interested in the chase–so when he is done being chased he flops on his back, belly up.  This works with Raven, who is not a killer even if she sounds like it at the front door, but it is not necessarily a good strategy with coyotes or even other dogs.

Koji looks at things with that look of a cold blooded, calculating killer.  He looks at me in that way sometimes.  I can almost hear him thinking, “If my claws were longer, I would kill you for that (whatever ‘that’ is today, shushing him when he starts talking to Akemi late at night or whatever).  Or when he climbs up on my chest to demand food, “Feed me, before I lose my patience and kill you.”  Yes, he is a killer, but until now it was untapped talent.

We are staying at the Kennedy Camp on Toddy Pond in Maine.  Dad’s Camp is in the woods and critters are present.  Raven chases squirrels all day and Koji kills mice at night. The second mouse was on the floor in the morning, much better than in bed with me.

Ever woke with a mouse?  What is your favorite pet story?

← Service as a Requirement for Office: What do you think?
Portland, Maine →