With a catch in my breath, I ask, “Is there any way to get it sooner.”

After the insurance company told me I will need to turn my title over if I accept their offer for the truck, I realized that I had failed to deal with my title after I paid off the truck, a few years ago.  Ugh, I also lost the title.  So, on Thursday I made the rounds of my credit union to get the release documentation and to request the replacement title.  But by the time I finished with DMV and knew the answer, “Four to six weeks,” the insurance company representative had left for the day.  And he was apparently out on Friday.

Long weekend of wondering, “What does this mean?” As I write this, it is Sunday and of course I still don’t have an answer to the that question, I don’t even have an educated guess.

But, I have been looking for an at truck advertisements and information.  Someone suggested that I should look at the internet, “Yep,” was my answer.  It turns out, again, and as usual, that is only one part of the answer.

I began to think about options as I look.  A straight up new truck does not seem to be the best direction for my situation.  My trailer would have to be jacked up or ride at a cockeyed angle to keep from damaging the bed on a new truck.  My old truck bed had taken a couple of folds on the bed from the trailer and new trucks would have the same problem.  Since I have been thinking about problem for a while, I have a solution—a flatbed replacement for the pickup bed. 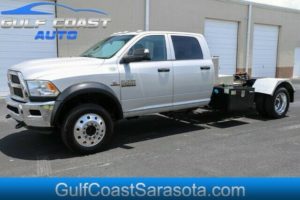 As I was driving to the RV shop where my fifth wheel trailer is awaiting insurance evaluation and estimating, I saw a truck load of ‘cab and frame’ trucks heading down the road.  “Mmmm,” was the commentary on this flash of inspiration.  Maybe I could buy a ‘cab and frame’ new and put a flatbed on to it? 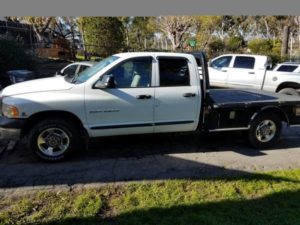 At the RV shop an old RAM 2500 with a flatbed and fifth wheel hitch was making a trailer delivery.  While looking for identifying marks on the bed, owner of said truck gave me the answer and offered to sell me his truck for $12,800.  Well, it turns out to be an ‘2005-2011-2016’ ‘Dodge, Cummins, Andy Special and he has a leather interior he’ll put in for another thousand bucks.  Still, cheap and probably reliable enough, but hard to tell. 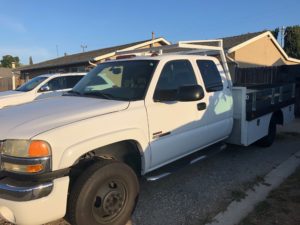 Will kayaks fit on that roof rack?

“Rocky is getting ready to sell his old trailer towing and work truck,” my nephew, Lee, tells me about his semi-adopted son’s truck.  Rocky doesn’t really need it anymore.  When I talk to Rocky the answer is that he had been planning to sell in a few months.  It is a one-ton, one-owner, low mileage GMC Sierra with an upscale flat-bed including rails and a hitch.  What’s not to like.  Rocky is a reliable man, he cared for the rig and is willing to sell it for what I am willing to pay.  Not much better than that I think, but until I look I don’t actually know.  Bench seat and extended cab vs. bucket seats and crew cab, but oh my it has my kind of bells and whistles.

Monday’s calls to DMV and the insurance company got answers I didn’t like, but not as bad as I feared.  Insurance can’t release the money without a title, but DMV said it would likely be next week when we get the money. 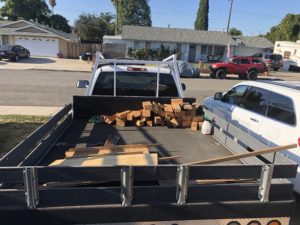 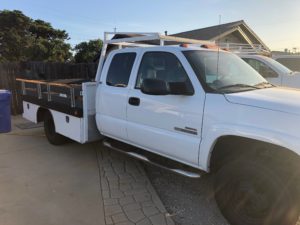 Saturday we’ll make a run up to Rocky’s house to visit and check out the GMC, but I have high hopes.  Too many ‘just right’ things on my list of ‘things I always wanted to do’, but couldn’t convince myself to actually do to my old truck…

Next article, The Trailer.

← EVERYBODY IS OK! –> Now what?
Searching for Love in all the Wrong Places (Recreational Vehicles and some thoughts) →