“That’s not a nice thing to say,” the woman said.  I laughed out loud, whereupon the party of three looked at me.  I was leaning against the wall on a corner of Commercial Street in the old port area of Portland, Maine watching people.  Usual collection: old, young, singles, groups and families wandered, strolled and walked purposefully past me.  Most are tourists of some sort, Mainers coming to the big city for the weekend or the day, people from the states farther south and a smattering of tourists from farther away—like me from ‘The West Coast’. 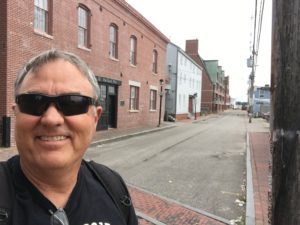 I wouldn’t have to drive

Akemi and I are visiting her dad near Bangor, Maine. If you haven’t heard the story of why and how we were visiting her dad, it is a story for another day.  We are driveway surfing on Dad’s driveway.  We try to leave for a few days every couple of weeks to go visit some of the more far off places. Gives us and him a break and allows us to empty tanks and see other places.  We tried to stop in Portland a couple of weeks ago, but it didn’t work out that well—Portland is not an RV friendly place.  It just doesn’t have the space for parking or really for driving around to make it comfortable.  Hence, we decided the two-hour drive down from Bangor for a day trip would be worth the effort, especially since I wouldn’t have to drive.

We arrived in time for lunch.  We wondered around the old port district for a while before deciding the best deal would be to go back to J’s Oysters next to the parking lot where we left the truck.  “The wait will 30-45 minutes,” Akemi tells me. 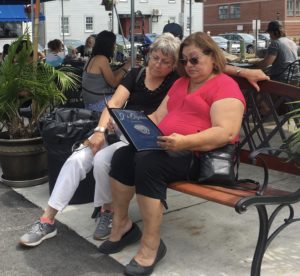 Just in time to review the menu

After the nice, young host assured me that if we missed the call she would put us at the top of the list when we got back, I set my watch for 30 minutes and we went off to explore the waterfront.  Mostly looking at the boats alongside the docks surrounding the parking lot and watching the people hauling stuff in dock carts (two-wheel carts ubiquitous on boat docks around the world). We returned 27 and a half minutes after we left.  Just in time to review the menu before my name was called.  Lunch was tasty and nutritious too!  Clam chowder for me, salmon skewer for Peggy and crab-salad for Akemi. Each was pleasant and well-presented while being reasonably priced—yea! (jsoysterportland.com)

Off to the bakery for dessert and bread to take home with a bit of shopping in between and each way.  “Here, you can eat this….” Mom to screaming-in-anger 4-year-old.  I know I frowned with the judgement that they are building a self-absorbed monster.

Leaning on the wall at the corner I watch and listen. “I said that at dinner last night, wait, were you there?” the lanky young urbanite in checkered shorts said to the obviously related also young man in a polo shirt and khakis.  I can’t decide if one of the young men is gay, or if I just don’t know east coast styles well enough to know the difference (and no I don’t really care except to try to observe my way out of a paper bag).  “No, I was still on the plane then…” the conversation continued, but farther away and quieter.

A frowning, kind of grimacing, man gives me a quick slightly-appraising glance as if to guess why I am leaning on the wall, but continues on his way across the street.

My bride and her sister were in the cooking and kitchenware store a couple of doors down.  I had decided that I had seen all I needed from the entrance, surmising that people watching would be in order.  “That’s not a nice thing to say,” the woman said.  I laughed out loud, whereupon the party of three looked at me.

Smiling, I said “All I heard was ‘not a nice thing to say’ and I don’t even know what the ‘thing’ is, but it sounded like something my wife would say.”  All three laugh and turn the corner.

‘Orange’ was written on the young woman’s sweatshirt.  “California,” said I as I pointed vaguely in her direction. 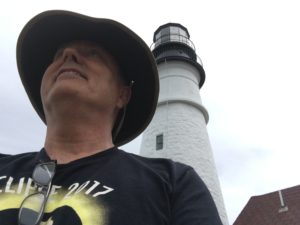 “That thing is annoying”

“Yes,” she answered.  Her sister, living in Washington, DC is a consultant to the federal government and they are visiting Maine because it seemed like a good idea.  And they were done with the conversation after 37.3 seconds.

“That thing is annoying” said the middle-aged woman about the foghorn blasting out to sea, even though we couldn’t detect any fog.

The sign said “Keepers of the Lighthouse” at the top and a little way down the list was ‘Dave Duncan 1796’. My brother, Dave Duncan, was a lighthouse keeper in the 1960’s at Point San Luis Lighthouse.  Precursor?

“My friend has ducks by her house just up the coast from here,” her voice trembled so much as to force me to concentrate on her mouth and words to understand, “but something is taking them either fish or something and they disappear.  I keep telling her that these ducks seem fine.

“Really, mmmm, well maybe there is just more so you don’t notice so much here,” I observe, brilliantly I might add.

“No, I am here every day and there is the same number every day.”  We chatted for a bit about her career as the owner of a dental appliance making company and about her husband drinking himself to death after his entire Navy band died in an airplane crash and about my trip in a plane with another Navy band. 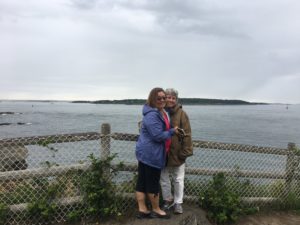 At the rest area along the I-95 there is a curio or tourist stuff shop.  Akemi and Peggy were across the store when I walked in and shouted in my best commanding tone, “Put that down!”  Every woman in the store (no men there) stopped and looked except, of course, for Akemi, who continued to contemplate her purchase.  She just laughs at my crazy, that is why she is still my bride, I make her laugh.