One of my few vices left is playing solitaire.  I have played the same game of solitaire my whole life.  My mother taught me the game when I was a child.  Maybe to help me work on numbers and logic, maybe because she played a lot of solitaire.  My little brother played too.  We all watched each other’s games like it was a spectator sport, sometimes helping sometimes not.  I even know a solitaire joke about watching the game.

Solitaire is mind-numbing simple.  I don’t know the history, nor do I play other games of solitaire besides the basic one my mother taught me: seven cards down the first face up then six cards down the second face up, on and on until you have seven stacks with a card face up.  After that you can go through the deck one card at time or three at a time.  I always do three and I keep doing three until nothing plays.

I heard that there are more rules in Sin City where you could play solitaire for money.  I used to play as if it was for money, keeping track on paper what I spent and earned.  Always seemed to be a break-even game, but I think in real life the house would win—the house always wins.

My first computers had solitaire on them.  Someone once told me that they only had fifty games at first, not the billions of billions of possible games that a shuffled deck has, but I have never found anything about it even when reading Wes Cherry’s story of writing the code as an intern at Microsoft.  The smart folks swore they could recognize and play out the game using only the winning plays.  I never could remember or even recognize that.

I play on my phone nowadays.  I break out a deck of cards on occasion because I like the feel and the nostalgia, but the phone doesn’t require table space and I am often playing to slow my brain down for sleep  or just to idle.  Not quite meditation, but a vague faux simile.

As I play I think, not much, but a little.  Sometimes it is about the past, sometimes about Mom, sometimes about how many plays I am missing.  I noticed some things were repeat thoughts, “Hey, didn’t I already figure that out?”  Here are a few of those. 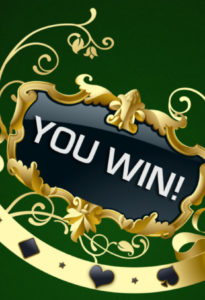 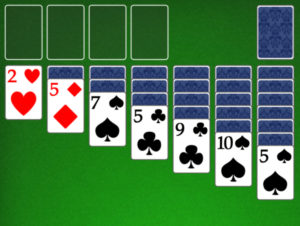 Maybe I’ll write some about what those mean one day.  Maybe not, but they are all metaphors for things I never learned during my working life.  I was doomed to repeat the same mistakes over and over, which from the perspective of retirement, I can see clearly.  Funny that, when it would have done me a service to recognize some of these things I could not see them.  Waaait, another one of those things I heard and wanted to do: slow down and think.  Of course I did slow down and think on occasion, but really did not get too much out of it.  When I did spend time thinking, it was much more about justification of the conclusion I had already made.

Still, solitaire is a good way to spend a few minutes ‘off line’ not accomplishing anything, but also not breaking anything and sometimes not saying out loud the dumb thing on my mind.

It is tour day on the US Navy aircraft carrier.  A Navy jet pilot is sitting next to his jet fighter with all of the stuff he has in the cockpit when he flies spread out around his lawn chair.  A boy is looking over all the gear, flight suit, helmet, parachute, pistol when he spies a deck of cards.  “Mister, what are the cards for?”

“Well, son, if I have to eject when I get on the ground I can play a game of solitaire.  Once I lay out the cards someone is sure to come along and tell me, ‘put the red seven on the black eight’ and I am found.

← RV Water Tanks
The Solution to my K-Cup® Delemma. →